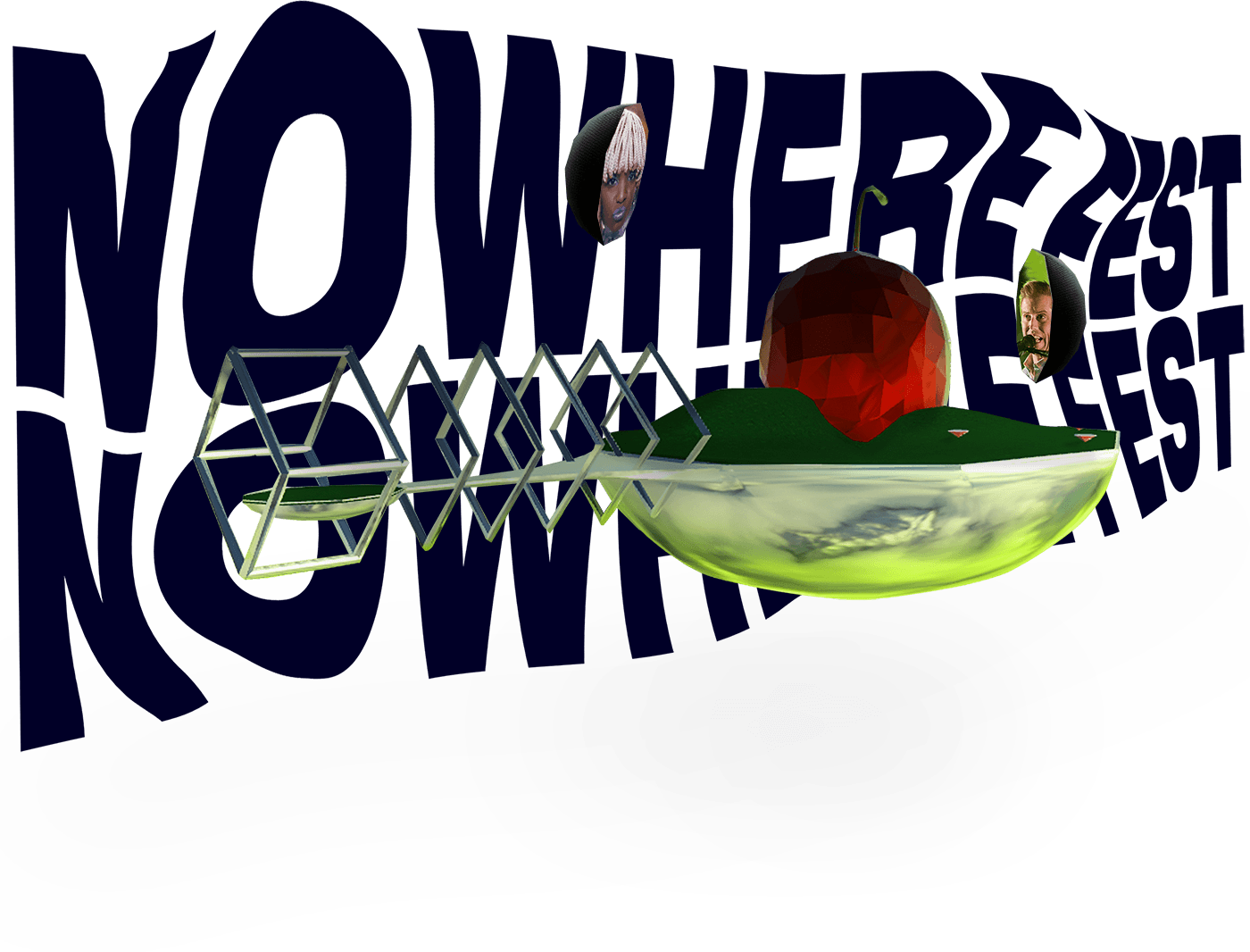 an Unlikely Event
‍
Attend performances, meet new friends, explore unforgettable worlds in the future of online gathering.
Join us as visionary creators and artists take to the stage of nowhere.

On the first anniversary of the pandemic, we celebrate inspiring silver-linings spirit and innovations that emerged over the last year.

All proceeds from ticket sales will go to Helping Hearts NYC.

Thank you for coming!!

Celebrated poet , performer, and educator. He created the poetry video platform SlamFind as a way to connect poets & poetry fans with live poetry venues around the country, and continues in the spirit of that work as Manager of Community Outreach with Get Lit and thru multiple forthcoming creative projects.

Nowhere has many hidden nooks. Chris will be hiding out within some of these areas. If you can find him, he's perfectly willing to have a one on one conversation with you. It can be as light hearted or as intense as you feel like. When anyone else stumbles into the room he'll disappear, so make the most of it.

Tana Yonas is a record collector and DJ's under the name "Passionfruit" with a specialization of tropical and alternative disco, jazz, and funk from all over the world. At nowhere fest, Tana will be leading a listening session of Afrobeat, a fusion of West African Highlife and American Jazz.

Vinny DePonto is a world renowned mentalist and mind reader who has performed around the world. He will be showcasing a segment from his critically acclaimed virtual show Mental Amusements on the NOWHERE stage.

Alain is the forward-thinking Founder and CEO of Sylvain Labs. In response to a year that has changed and challenged our world, Sylvain will screen his lecture on designing through collective trauma and host a live virtual Q&A exploring how these ideas can touch us all.

Originally born in Hong Kong, DJ MSG is the most flavor packed import to hit the States after dim sum. MSG’s musical roots come from working at the acclaimed Club Shelter, which was New York City’s longest running dance club night. There he worked closely with DJ legend and Motown Director, Timmy Regisford.

Will and Shaye will explore many topics, including the rise in drive-in culture, innovations in social distancing in the food and drink/culture spheres, cool socially distanced burlesque and other outdoor theatrical performance and also include the moments of collective memory and remembrance over the last year.

Founder of Globally Curated and Host of Reinventaissance will share how the COVID-19 pandemic has brought about pivots in the arts and culture sectors on a global scale and the journey from a "Dark Winter" to a bright, "Artivist"-led horizon.

Interdisciplinary artist, filmmaker, and educator sharing his latest video art experience, “Invisible Violence”, a visual requiem for the forgotten Mexican workers who were burned alive or wounded in routine gasoline baths at the Mexican border, part of a study of ancestral narratives for Gonzalez’s upcoming feature.

Tana Yonas is a record collector and DJ's under the name "Passionfruit" with a specialization of tropical and alternative disco, jazz, and funk from all over the world. At nowhere fest, Tana will be leading a listening session of Afrobeat, a fusion of West African Highlife and American Jazz.

The panelists will include co-creator Tessa Whitehead, Producer and Game Designer Jae Lee, and Eschaton performer and RuPaul's Drag Race alum Brita Filter to discuss the emergence and future of virtual performance. The panel will delve into Eschaton, the virtual nightclub and immersive experience.

Pete Vigeant of The Completely Surrounded hosts interactive game sessions that range across the various spaces of NOWHERE FEST.

Christine Jones is a Tony Award winning scenographer and the creator of Theatre for One. Jones, along with director Tamilla Woodard, and actor Shyla Lefner, will lead a conversation to discuss the Theater for One theatrical experience and how it evolved over the last year in response to Covid and the BLM movement.

Shaun Nanavati is a neuroscience researcher, professor, and clinician with an interest in Eastern philosophy. His research interest is in Mindfulness and its impact on the autonomic nervous system, with special emphasis on the parasympathetic nervous system.

Morning in our World: Mourning, Memorial & Thriving Beyond the Pandemic - Clal President and Columbia University Rabbi Irwin Kula, tech industry leader and artist Kristina Libby and TWIN Global Co-founder and Chair Professor Rob Wolcott explore how we can move forward by looking back with courage, compassion and love.

Vallejo Gantner is the co-founder of hoovie.movie, hireartists.org, and partner in mkrs.family. Former Artistic Director of PS122 and the Onassis Foundation USA. Vallejo will host a live arts panel with Kristy Edmunds, Sadah Espii Proctor and Theo Triantafyllidis.

Toronto-based photographer and educator who will lead this workshop inspired by his pandemic project, Portraits in Isolation, which documented lockdowns all over the world through remote photography. This workshop will cover the technology, tools, and techniques used to make authentic portraits virtually.

Are you depressed about the climate emergency? Enraged? Terrified? Come share your experience in small groups, facilitated by Margaret Klein Salamon, PhD, Clinical psychologist and climate activist. Participants in these conversations report feeling connected, relieved, and motivated for action.

The Feast + Art Plus People hosting experiences and games that explore potential through art and rebuilding our humanity online.

A conversation about the future of live performance, looking especially at hybrid in-person/digital modes. Join us in conversation with past and potential future artists, and let us know about your ideas and proposals around our 2021 themes, HUMANITY and INTERSPECITALITY.

Group.BR, NYC's only Brazilian Theater Company, will host a conversation about the importance of new platforms for performing arts and present excerpts of an immersive theater piece that has been performed live in NYC and adapted for the virtual world during the pandemic.

How did all these indie venues join together so quickly? How did NIVA get Congress to pass the $15 billion Save Our Stages Act? NIVA members discuss the formation of NIVA, the SOS Act, the SOS Fest on YouTube, and what the group is doing now.

Making Radio Remotely Possible: NPR in the pandemic Panel with NPR Broadcasters Scott Simon and Robert Siegel exploring how NPR news has functioned during the pandemic, how different, it has been from “normal“ times, and what is gained or lost in the experience of remote work.

Tiny museums for everyone, everywhere (even nowhere). YOU are a museum designer. Everyone can be. We will show you how. Charles and Dan are part of MICRO. They make tiny museums with communities in order to create big change in society.

Built out of a necessity to connect with one another & inspired by TV games shows, QM is interactive trivia, customized and curated around it’s contestants & our new normal. Join QM for The Nowhere Special, a mixed bag of the most popular QM Q’s and fan favorites from the hundreds of games produced over the last year.

A conversation with House of Yes and Elsewhere founders.

Andrew McMahon is a singer-songwriter who has released 3 albums as Andrew McMahon in the Wilderness and many others with his previous bands Jack's Mannequin and Something Corporate. At the festival he will be sharing his experiences around touring in the time of Covid and his “Drive-In through a Dream Tour.

Internationally renowned dancer and choreographer, will share her latest solo titled Harbour; a reflection on our elders we've loved and lost, who've departed but who we keep close. This was piece was created through Covid-19 while in residency at The Dance Deck, a local outdoor studio space in Vancouver, Canada.

Sylvain Souklaye is a French multimodal artist. His methods characteristically involve intense physical acts and unsettling intimacy.Ceci n’est pas un masque is a performance about the mundane abstraction of reality. Fashion, fiction and function are the triumvirate articulating this experiment.

Bar and restaurant in Brooklyn/Queens border that has pivoted to create Helping Hearts and provide aid to those affected the most during the pandemic, and to those on the front line saving lives. More than 30.000 meals distributed! Deep End will curate DJ's and will speak about their experience through the past year.

& more to come
The fest is now over.
What will you host?